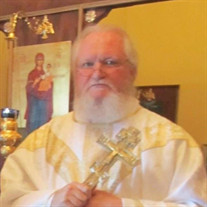 Jimmie David Colburn, known later in life as Father David and Abbot David Colburn fell asleep in the Lord at his home on Dayton Mountain Tuesday morning, December 15, 2020. He was born to loving parents J.L. and Annie Belle Tarpley Colburn in Benoit, Mississippi, at Dahomey Plantation and grew up in Greenville, Mississippi. He attended Louisiana State University at Monroe where he majored in music, Spanish, and Library Science. As a member of the Order of St. Agustin he taught at St. Michael’s in Picayune, Mississippi. He was also the last surviving founder of the Monastery of the Glorious Ascension in Resaca, Georgia. After moving to Tennessee he worked at the Cleveland State Library and served the Bledsoe County School system as media specialist, technology coordinator, Spanish and ESL teacher. Since his retirement from teaching, he dedicated himself to research and writing, publishing several service books, used in Western-Rite Orthodox churches world wide. He served as founder and priest of the Western Rite parish of St. Mary the Virgin Our Lady of Walsingham Orthodox Church affiliated with ROCOR, the Russian Orthodox Church Outside Russia. In Dayton, Tennessee. Abbot David is survived by his two sisters, Margaret Colburn Strong of Dayton and Debra Colburn Kinney of Petersburg, Tennessee, a niece Ashley Strong Brown and nephews Christopher Strong, Andrew Colburn Dean, and Joshua Keith, also his long-time friend and co-worker Fr. Deacon Richard Daugherty and his loving, devoted dog Wotan. Father David was known and loved by many and will be sorely missed. Services will take place Friday December 18 in the Chapel of Vanderwall Funeral Home in Dayton under the direction of Father David Prestridge of St. Bartholomew’s Orthodox Church in Chattanooga and Father Jonas Worsham. Visitation will begin at 12, Trisagion Prayers at 1, and the Funeral Mass at 2, and burial following. Father David’s earthly remains will be laid to rest at the McDonald Cemetery in the Snow Hill community. Please share your memories and photos of Father David on his online guest register at www.vanderwallfh.com. Social distancing is strongly encouraged and MASKS WILL BE REQUIRED. Memorial contributions may be made to the Abbot J. David Colburn Scholarship Fund in care of St. Mary the Virgin Orthodox Church, 889 Walker Road, Dayton, TN.

The family of Father David Colburn created this Life Tributes page to make it easy to share your memories.

Send flowers to the Colburn family.